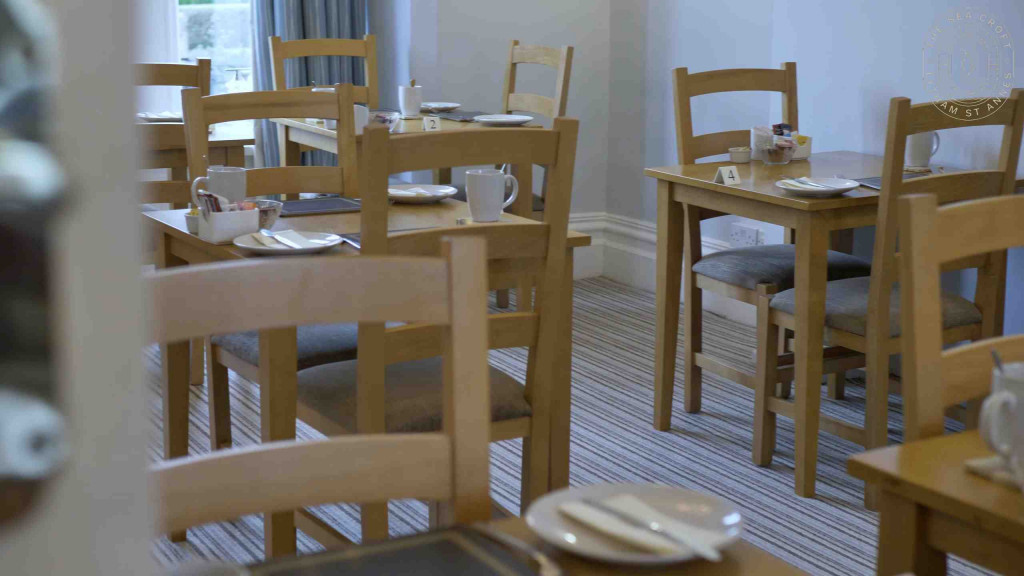 We had the pleasure of recording a promotional video for The Sea Croft Bed Breakfast and Bar in Lytham St. Annes, Lancashire. The client wanted a video that they could embed within their new website as well as for posting on social media. The video had to be made within a cetain timescale, for various reasons, which meant that it literally had to be recorded in the middle of winter which is not ideal when showcasing a venue that is usually visited in fairer weather but needs must.

We arrived on site just as a storm was approaching and the first concern we had would that there might not be enough light on the day for a suitable recording as the windows at the property were on just two elevations facing both north and south on what was a very dull and overcast day. As with most videographers, however, we had a selection of lenses with us that had low f-stops, meaning that these particular camera lenses had apertures that could open quite wide allowing more light to enter them and reach the camera’s sensor. The downside to this can be that the images that enter the lens are not as sharp as they would otherwise be with an aperture that was more ‘closed down’ which is when you have to start playing about with the ISO and frame rates and all that good stuff to arrive at a compromise as best you can under the light conditions.

The client’s were lovely and once introductions were over with, wearing our mandetory Covid-19 face coverings, we got a guided tour of the premises and agreed on what aspects of the business would be recorded. While a video can be as long as anyone wants it to be in order to show all aspects of the business, we believe that showing everything is not always the best policy. Would you really want people to see everything, warts and all? Even the best of us have a room that we would rather be left closed when it comes to visitors never mind featuring on a video recording to be shown to the public! A warts and all policy doesn’t work when it comes to video.

We like to explain that our work should not be dissimilar to a film trailer. It should be kept short, to the point and show some of the best of what is on offer, essentially to tease the viewer and basically leave them wanting to see more. That’s the theory alt least. At the end of the day, the video is an advert that should not be painful to look at. Luckily for us The Sea Croft was a well groomed establishment that was pleasing to the eye. The problem that arises with such places is that you then have to decide what footage will be left out. That said, it’s always better to have too much footage than not enough.

We worked our way around The Sea Croft taking a variety of shots in various rooms. When recording inside a building, we like to take wide shots first of all using a 7.5mm lens. A variety of push-in shots, crane shots, pans, twists and tilts were taken that were all ‘hand held’, well sort of. Technically we had the camera in our hand and not on a tripod or slider for this particular shoot, however, we like to use a gimbal as it vastly reduces camera shake and produces footage that we think is a lot more pleasing to the eye for this type of video production. Wide shots taken care of, we swapped the 7.5mm for a 25mm lens and returned to work our way through the same rooms again, this time taking medium and close up shots of various apects within the accomodation. These are the detail and cut away shots that you can use in between the wider shots.

So with the bedrooms all sorted we moved downstairs, shooting footage in the dining and lounge areas. It would simply be rude to make a video for a bed and breakfast establishment without showing a breakfast of some sort and the client was very keen to show some of their offerings. In the kitchen, using our LED panel light, we recorded a few simple breakfasts being prepared knowing that these would have to be edited down to just a few seconds in the final cut simply to reduce the length of the video. Everyone knows that you generally get a lovely slap up meal at a B&B. We just had to tip our hat for the video and show a few frames of the tasty breakfast that The Sea Croft offers it’s guests.

With the food element all sorted and because the B&B was a licenced to sell alchol, that just left us to show the inside bar, so we recorded a selection of drinks being made by the client and a process that always looks good on video we think. Then after taking a few external shots and about three and a half hours recording on site in total, we felt that we had enough footage ‘in the can’ to show everything that the client wanted to project to viewers and potential visitors alike.

What was interesting is that prior to visiting the site we had already spent a little time chosing the music that we thought would suit the establishment but after talking with the couple who owned and ran The Sea Croft and seeing just a little bit of their personalities, we wanted to change the music to something of a more Balleraic feel. Something more relaxed and more appealing to younger couples which is the type of custome that the B&B wanted to attract going forward.

In summary then for those of you who are interested (or still reading!), from downloading the The Sea Croft logo, searching for music and all of the other preparation work, travelling to and spending time on the site to obtain the footage before returning to the PC and editing it into a video, we recorded 28 hours work in total that was spread over four days.

By: Paul Mc | 11th Feb 2021
How should a client prepare for a video and commission a videographer? How much does a videographer cost?